Remember these? Diagrams are finally available, with thanks to my friend Brendan for test-folding them.  Would you believe it’s been so long that I can’t honestly remember when these were designed? I’m not even certain what year it was.

The biggest hurdle here is all of the 60-degree angles. If you’re already comfortable folding those, this should all fall into place quite easily. If you aren’t used to them, you will be after this lot!

I do not have a proper source for Keats’ alleged accusation to Newton – that he had destroyed the wonder of the rainbow by reducing it to prismatic colours. It might be that he never said any such thing. I’m sorry, Keats, if this is only a rumour that keeps following you around. It must be maddening. Especially when you went on the record with Beauty is truth, truth beauty. 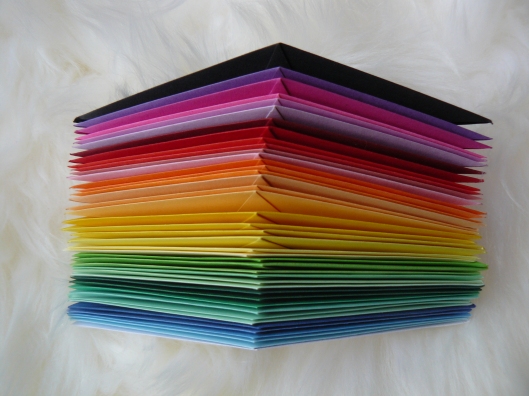 But I should think most people who’ve heard that line have thought the same thing in response to it. It’s a bit dog-in-the-manger. Just because you’d rather not know why certain things are as they are, that’s no reason for everybody else to avoid thinking about them. For lots of people, understanding how something came about is a gain, not a loss. (Richard Dawkins spent a whole book saying so, and it’s rather a good read.) 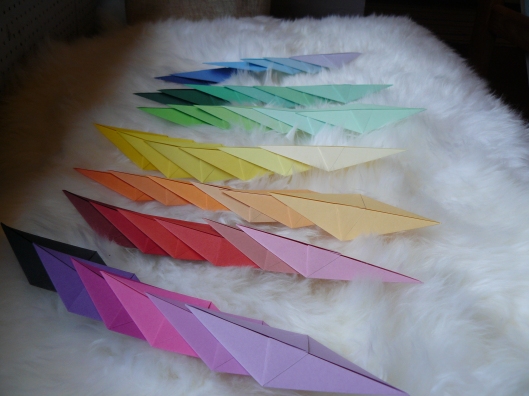 Here, Keats. I put this rainbow back together. There aren’t any diagrams (yet), so you can rest easy. There probably will be, though, so enjoy the mystery while it lasts. 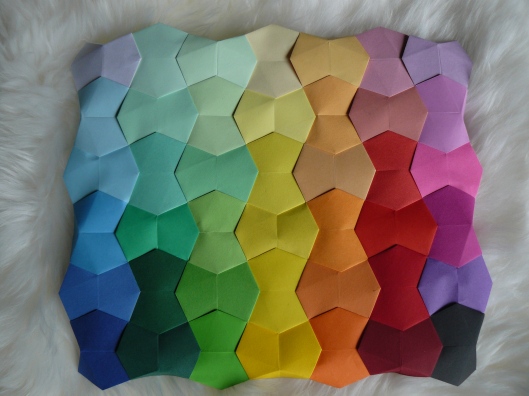 One silver rectangle*, A4 in this case.

It becomes seven smaller silver rectangles – two A6, three A7, and two A8. 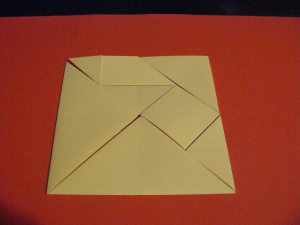 This is a good office fidget, because it’s so fast and easy to construct and you can probably put your hands on a sheet of A4 paper without too much trouble.

Here’s how you do it. See here for the waterbomb base.

Thanks to the friends who test-folded these: you know who you are!

*Any rectangle where the long edge is √2 times the length of the short edge. If you divide one in half, each of the halves has exactly the same aspect ratio as the original. A4 paper is a silver rectangle, as is A3 or A5 (and so on) or B4 and its family. If you live in the US  then I do not know what tricks your standard paper sizes do – sorry! But you can trim it appropriately by doing careful things with diagonals.

I saw this sign posted in the lobby of a friend’s apartment building in Dublin. It says, I think:

It has been brought to my attention that there is a WILD FOX roaming the complex.

FOX’S ARE Wild Animals and are not to be approached as they are dangerous and carry (diseases?)

We have informed a Pest Company and getting advice on how to stop them from being in the complex.

In the meanwhile Parents please keep your children safe, away from the Fox and do not try and pet them, offer them food or approach them in any way as they are wild and unpredictable.

Make sure you are tying up your strong black refuse bags and placing the Bins and closing the lids – Do not leave rubbish on the ground.

You guys, Dublin has a whole lot of urban foxes. (Check out a family member’s blog on the subject!) They’re about as common as squirrels, which is to say less so than pigeons but nowhere near rare enough to get worked up about. Like, when you see a dog-shaped but catlike shadow flitting down the street at twilight you think Oh, there goes a fox rather than HOLY RAVIOLI A WWWWILD FFFFOX RUN FOR THE HILLLLLS!

So yes, frantic writer of signs. There’s quite likely more than one fox in this territory, you can’t pet it whether or not you try to(!), and of course you shouldn’t leave rubbish on the ground but doesn’t that go without saying? And there’s nothing much to worry about.

This little fox is not a perfectly-engineered realistic sculpture, but I like it.   There’s something appealing about a model that’s so stylized it’s almost a physical cartoon. I’m especially fond of the tilted, inquisitive ears – foxes have acutely sensitive hearing and they do swivel their heads just like that to listen.

Would you like diagrams? They’re pretty quick and enjoyable to fold.

If you’re not happy yet, try saying “Hexaflexagon” a few times. It’s a fun word.

I first discovered hexaflexagons as a teenager, loved them, made them obsessively for a few weeks, and then lost interest. But a few (several) weeks ago it was world Hexaflexagon Day, and out of the blue I realised that I wanted a hexaflexagon covered with snakes. 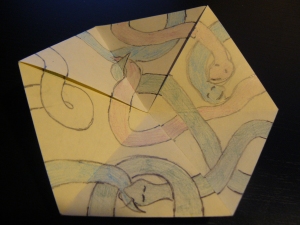 So I drew these snakes…

… and these snakes drew themselves

Aren’t they cute? Then I had to see what happened if the snakes were allowed have more than one head each, or if more then two snakes slithered in from each edge, so it turned into more of a hydra than it seemed at first which is why this is at least a month late. Anyway. 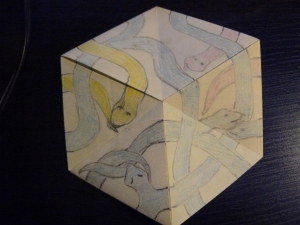 I tried making a template for you to print and cut and snake away yourself, but it required mad precision in getting marks on two sides of the page to line up perfectly when you print double-sided, and since you might not even use A4, depending where you live, it all got awfully error-prone. But here’s how you do it. You make a hexaflexagon following any of the instructions you find online – here, f’rinstance – and also you cut or fold or otherwise engineer a strip of paper the same length as the edges of your triangles.

This piece of paper is how you make all the bodies line up (gosh that sentence sounded less like you’re a crazy murderer in my head… moving swiftly on!) so symmetry is important. Fold it in half to find the midpoint, and make a pair of marks roughly in the middle of each half. They don’t have to be exactly in the middle, but the two halves do have to be perfect mirror images of each other. 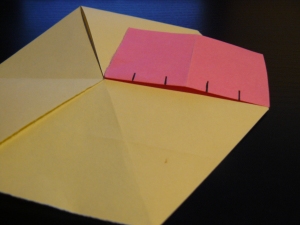 An important pink piece of paper

Instead of seeing your flexagon as six triangles, see it as three regular diamonds. Use your guide strip to mark along each edge.

The edges of the diamond are the overlappy ones; the middle is just a crease

Fill it with snakes! This is now my go-to piece of advice for every situation. It won’t always solve the problem but it will generally give you a new and more interesting problem instead.

Repeat for the remaining two diamonds. Try to get an equal number of heads and tails in there, or your snakes risk looking a bit funny. Unless you’re doing hydras, in which case try to have a majority of heads. A hydra that just kept growing new tails would be a fairly crappy foe. Oh lordy, though, I’ve just thought – a hydra scorpion that kept growing more tails would be nightmarish indeed, wouldn’t it?

Then you just flex it around to flip between arrangements of snakes. You’ve got two more surfaces waiting inside to be snakified too – you can even make them wrap from one side to the next! 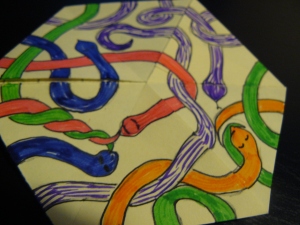 It was like this, officer. What happened was that the lovely Triona of Science is Delicious very kindly read through the diagrams for these units, and then I kind of completely failed to do anything. You know how, sometimes, you procrastinate a little bit and then tell yourself Well, when I get around to doing this I’ll do it so well it will be totally worth the wait. Only then the task you’re avoiding becomes bigger, and harder to start, so you decide to take your time so that when you do get around to it you will do such a spectacular job that the ridiculous amount of time it’s taken will be totally justified, but then… you can see where this is going.

Actually, shortly after drawing these up it struck me that I’d missed a much simpler way of folding them. But on past form, it seems a bad idea to get into that now. We’d probably be here all year.

If procrastinating was an olympic sport, I would definitely medal.

So last week I went shopping for swimwear. Did you know that it’s almost impossible (except in a sports shop, where people presumbaly care about other features) to buy a swimsuit without something called “shape control panels” or “absolute tummy control” or “your total shape solution”? A total shape solution, by the way, seems to mean a special reinforced panel around the tummy region. I don’t like the idea much, partly because I’m obscurely irritated by amount of products which have become solutions. (Your complete coloured paper solution! Your ultimate clothes peg solution! Really, people?) 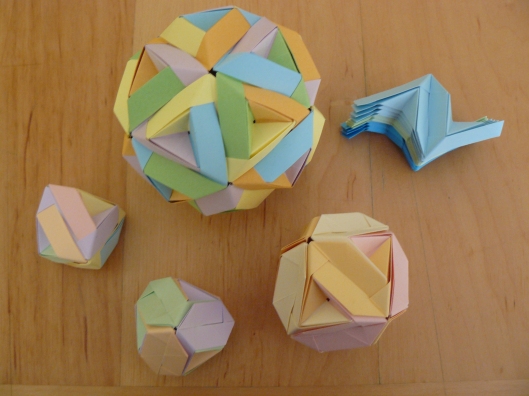 Anyway, this business of shaping solutions also annoys me because where a solution exists, the existance of a problem can be inferred. And what is a shape problem? It seems to be a synonym for having an abdomen. There are almost no swimsuits that don’t assume you need some kind of solution for your stomach region, however small a swimsuit you wear. It makes me sad. Tummies are not intrinsically problematic, are they?

These units will present you with a shape problem if you use paper that is almost-but-not-quite square. But they are quite easy to fold and quite pretty, I think. Would you like some diagrams? There could be diagrams. Sorry, I should have said – there could be a complete diagram solution. If someone volunteers to test-fold them (offers a test-folding solution?) to see if they make sense. 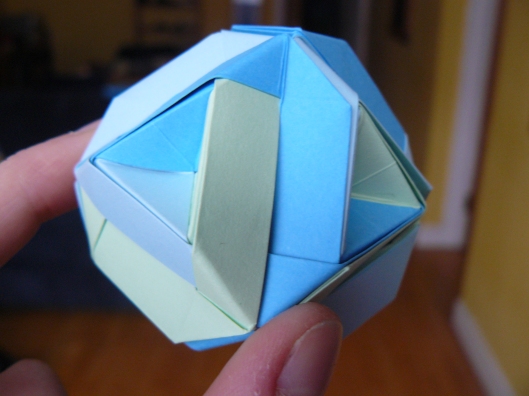 Now I’m off to find a solution to the problem of washing up. I think it probably involves washing the dishes, don’t you?

Harrumph. Hellooooo? Is this thing on?

So here’s a blog, right, for all my origami pictures and diagrams to live in. They’re mostly modular origami, but only mostly; sometimes the craftiness gets out of control and escapes from origami entirely and turns into baking or sewing or something.

To start off, here’s a nice simple modular unit to try out – the Rum & Raisin unit. Yes, that’s a terribly silly name for it. It’s not entirely my fault. Homemade fudge was involved. 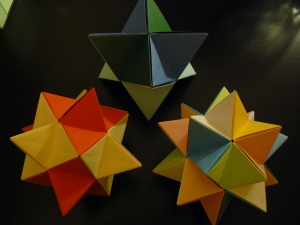 If you’d like some Rum & Raisin structures of your very own, here’s what you do. There’s a bit of leeway on the exact shape of the rectangle you start with. I used A6 because that’s most easily available in these parts. Quarters of whatever shape of paper you get in ordinary notebooks wherever you are is probably fine too.

Six of these will get you a nice stellated tetrahedron. That is fancy talk for “a pyramid with an extra pyramid stuck to each face”. Have fun!